Mark Lynas delivers a vital account of the future of our earth, and our civilisation, if current rates of global warming persist. And it’s only looking worse.

We are living in a climate emergency. But how much worse could it get? Will civilisation collapse? Are we already past the point of no return? What kind of future can our children expect? Rigorously cataloguing the very latest climate science, Mark Lynas explores the course we have set for Earth over the next century and beyond. Degree by terrifying degree, he charts the likely consequences of global heating and the ensuing climate catastrophe.

At one degree – the world we are already living in – vast wildfires scorch California and Australia, while monster hurricanes devastate coastal cities. At two degrees the Arctic ice cap melts away, and coral reefs disappear from the tropics. At three, the world begins to run out of food, threatening millions with starvation. At four, large areas of the globe are too hot for human habitation, erasing entire nations and turning billions into climate refugees. At five, the planet is warmer than for 55 million years, while at six degrees a mass extinction of unparalleled proportions sweeps the planet, even raising the threat of the end of all life on Earth.

These escalating consequences can still be avoided, but time is running out. We must largely stop burning fossil fuels within a decade if we are to save the coral reefs and the Arctic. If we fail, then we risk crossing tipping points that could push global climate chaos out of humanity’s control.

This book must not be ignored. It really is our final warning.

Review in The Sunday Times (UK).

SEEDS OF SCIENCE: How we got it wrong on GMOs

“Mark Lynas was one of the original GM field wreckers. Back in the 1990s – working undercover with his colleagues in the environmental movement – he would descend on trial sites of genetically modified crops at night and hack them to pieces. Two decades later, most people around the world – from New York to China – still think that ‘GMO’ foods are bad for their health or likely to damage the environment. But Mark has changed his mind. This book explains why.

In 2013, in a world-famous recantation speech, Mark apologised for having destroyed GM crops. He spent the subsequent years touring Africa and Asia, and working with plant scientists who are using this technology to help smallholder farmers in developing countries cope better with pests, diseases and droughts.

This book lifts the lid on the anti-GMO craze and shows how science was left by the wayside as a wave of public hysteria swept the world. Mark takes us back to the origins of the technology and introduces the scientific pioneers who invented it. He explains what led him to question his earlier assumptions about GM food, and talks to both sides of this fractious debate to see what still motivates worldwide opposition today. In the process he asks – and answers – the killer question: how did we all get it so wrong on GMOs?”

Everything you thought you knew about nuclear power is wrong. This is just as well, according to Mark Lynas in Nuclear 2.0, because nuclear energy is essential to avoid catastrophic global warming. Using the latest world energy statistics Lynas shows that with wind and solar still at only about 1 percent of global primary energy, asking renewables to deliver all the world’s power is “dangerously delusional”. Moreover, there is no possibility of using less energy, he reminds us, when the developing world is fast extricating itself from poverty and adding the equivalent of a new Brazil to global electricity consumption each year. The anti-nuclear movement of the 1970s and 80s succeeded only in making the world more dependent on fossil fuels, he shows: its history is “not lit by sunshine, but shrouded in coal smoke”. Instead of making the same mistake again, all those who want to see a low-carbon future need to join forces, he insists, concluding the book with an ambitious proposal for an Apollo Program-style combined investment in wind, solar and nuclear power.

This book was originally published in digital only as a Kindle Single but is now available in paperback.

The God Species: Saving the Planet in the Age of Humans

Or buy from National Geographic Store

From the back cover of the UK edition:

We humans are the God species, both the creators and destroyers of life. In this groundbreaking new book, Mark Lynas shows us how we must use our technological mastery over nature to save the planet from ourselves.

Building on recent scientific discoveries, Lynas explains that there are nine ‘planetary boundaries’ that humanity must not cross if Earth is to continue to support life an our civilisation. Climate change is one, but others – like ocean acidification, nitrogen use and biodiversity loss – are less well-known, though equally crucial. These boundaries all interact, and we can only hope to manage the planet successfully if we understand how they affect one another.

But this is no depressing lamentation of eco-doom. Instead, Lynas presents a radical manifesto that calls for the increased use of controversial but environmentally-friendly technologies, such as genetic engineering and nuclear power, as part of a global effort to protect and nurture the biosphere. Ripping up years of ‘green’ orthodoxy, he reveals how the prescriptions of the current environmental movement are likely to hinder as much as help our vitally-needed effort to use science and technology to play God and save the planet.

Six Degrees: Our future on a hotter planet 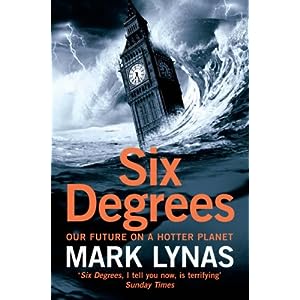 Six Degrees was made into a TV film by National Geographic, which has now been viewed by tens of millions around the world.

High Tide: How climate crisis is engulfing our planet

‘With High Tide, Mark Lynas has given us a tremendous gift: he has time-travelled into our terrifying collective future, a future that has already arrived in the farthest reaches of the globe. Go with him on this breathtaking, beautifully told journey — to island nations being engulfed by rising tides, to towns swallowed by encroaching desert, to glaciers melting into oceans — and I promise that you will come back changed, determined to alter the course of history.’ Naomi Klein, author of No Logo 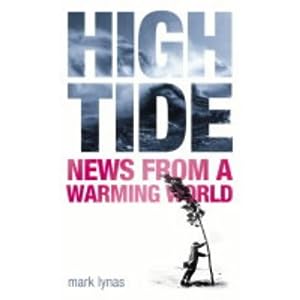 ‘If you are among those who think climate change is an uncertain, remote issue over which scientists are unsure, politicians talk endlessly to little effect, and mere individuals have no power at all, this book may be for you ! Lynas tells us to keep repeating the climate change message. Read his book, and that is exactly what you will do.’ Guardian

‘There will be many more books like High Tide, but this will be remembered as the first ! it’ll be the one with the original vision ! Not unworthy of comparison with Orwell and certainly the breaker of new ground.’ Independent