North Korea – a stain on the conscience of the world

How long is the world going to tolerate the human rights hell-hole that is North Korea? Part theological Communist dictatorship, part dynastic monarchy, the so-called Democratic People’s Republic of Korea reportedly has somewhere between 150,000 and 200,000 people confined permanently in its network of Soviet-style gulags, subject to slave labour, starvation, torture and execution. No other human rights-abuser comes close to North Korea’s record of hideous crimes inflicted on its own population –  not Zimbabwe, Syria, Iran nor any of the other ‘rogue states’ still present on the international map today.

And yet our own response, cowed as we apparently are by the regime’s new-found nuclear weapons capability, has for years been one of perpetual appeasement. We send food aid to North Korea’s malnourished population in return for minor diplomatic advances, enabling the regime to feed its million-strong army. Our governments constantly kowtow to the regime in the hope of co-operation on disarmament, despite the near-certain prospect of policy failure – and the knowledge that by supporting North Korea’s continued dictatorship its population are deprived of any semblance of basic rights or liberty.

Things might be changing, as the sheer awfulness of the regime’s human rights record gains international profile. This week the Economist weighs in with a strongly-worded editorial which rightly concludes:

A world that places any value on the idea of universal human rights should no longer overlook North Korea’s enormities. China should end its shameful forced repatriation of North Koreans and allow the Red Cross and the UN High Commissioner for Refugees into border areas. It should also cease sheltering the Kims at the UN, which should launch a commission of inquiry. America and South Korea, especially, must not hide behind nuclear diplomacy, but press harder on human rights. On April 15th the state’s young new ruler, Kim Jong Un, marked the centenary of his grandfather’s birth. This third-generation seed of the Kim dictatorship must now be confronted with his own murderous inheritance—a blot on humanity.

Another absolute must-read is the extract which ran in the Guardian recently of Shin Dong-hyuk’s book ‘Escape from Camp 14’ – detailing in harrowing detail how Mr Shin managed to escape from a prison camp after watching his mother and brother executed, possibly becoming the only person born inside a North Korean gulag ever to have reached freedom. I know we live in a busy world, but I recommend you stop what you are doing and read this in its entirety. 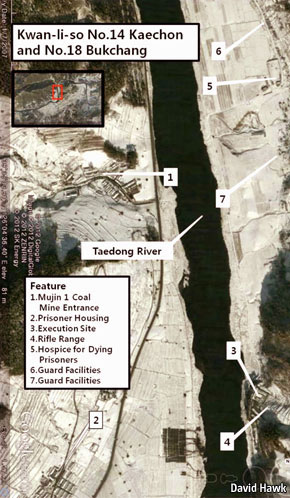 “Execute Jang Hye Gyung and Shin He Geun, traitors of the people,” the senior officer said. Shin looked at his father. He was weeping silently. When guards dragged her to the gallows, Shin saw that his mother looked bloated. They forced her to stand on a wooden box, gagged her, tied her arms behind her back and a noose around her neck. She scanned the crowd and found Shin. He refused to hold her gaze. When guards pulled away the box, she jerked about desperately. As he watched his mother struggle, Shin thought she deserved to die.

Shin’s brother looked gaunt as guards tied him to the wooden post. Three guards fired their rifles three times. He thought his brother, too, deserved it.

There are groups dedicated to raising awareness of the plight of North Korea’s benighted populace, most prominently the Committee for Human Rights in North Korea (HRNK), which has just released a 6-MB report (PDF) detailing the regime’s ongoing crimes against humanity in excruciating detail over more than 200 pages, and illustrated by Google Earth images (such as the one above) pinpointing the location of some of the prison camps.

What can we do? We should certainly put pressure on our own governments to do everything they can to bring about the demise of the North Korean regime, rather than pandering to its blackmail tactics over nuclear arms and missile launches. But one country above all keeps the Kims in power, by being their one and only powerful ally. That country is China.

The HRNK meekly asks that the Chinese government “respect the rights of North Korean refugees” (at the moment many who manage to cross the border into China are deported straight back, in defiance of international norms, to face likely torture and execution).

I think we can go much further, and demand that the Chinese government stop supporting North Korea altogether. How? By starting a mass campaign to embarrass China diplomatically in any way we can think of. For starters, why not email your local Chinese embassy, write to the press or post a blog highlighting the ways that China supports the world’s most unpleasant rogue state? The Chinese government helpfully provides a list of its embassies here – and most of them have email contact addresses.

I know from personal experience that China cares a great deal about its international image and prestige. So let’s hit the Kims where it hurts – by putting pressure on the superpower neighbour that is responsible for their continued existence at the helm of North Korea.