What does the Japanese quake crisis say about nuclear power?

I write this with the Japanese TV broadcaster NHK on live in the background, bringing rolling news of the steadily intensifying crisis at the Fukushima Daiichi nuclear plants. Violent explosions have torn apart two out of four containment buildings, whilst reactor no. 3 is reported to have lost its coolant. In an ongoing situation, which could yet get much worse, it is clearly premature to draw conclusions about the lessons of the crisis for the needed global nuclear renaissance – but there is no doubt that what we have already seen represents an extremely dangerous situation with serious global implications. 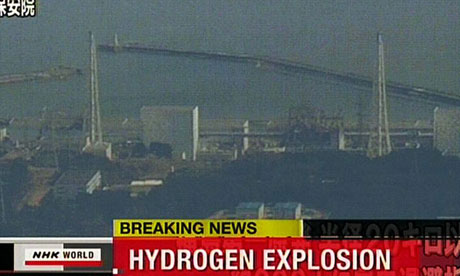 Here is what we know so far: although the Fukushima plant did automatically shut down after the magnitude 9.0 earthquake struck – and was miraculously undamaged, testifying to the engineering standards of its 40-year-old design – it did lose external power. Then disaster struck, when the tsunami overwhelmed the backup power systems which are dependent on diesel generators. Without power, the coolant systems began to fail, and the reactor core began to heat up: even with the control rods fully inserted, fission products within the core will continue to generate significant heat.

This combination led to two (so far) hydrogen explosions, probably as a result of hydrogen vented from within the primary containment vessel (which surrounds the reactor core) accumulating at the top of the buildings which house the reactors. Even with these explosions, so far very little radioactivity has been released. Seawater mixed with boric acid is being injected into all the affected reactors to try to keep them cool and avoid a meltdown scenario which could lead to a further uncontrolled chain reaction and a significant release of radiation to the environment.

This crisis could certainly get much worse. Even the best-case scenario would need to see emergency-style cooling maintained for weeks, and the permanent scrapping of the entire nuclear plant if the fuel rods have been deformed by excess heat. Moreover, it is very difficult to imagine a scenario however whereby no significant damage is done in the public mind to the image of nuclear power – just at the time when the need for large-scale carbon-free power sources was beginning to turn around support for the nuclear industry.

This may not be entirely fair. The majority of the world’s nuclear plants are not situated in seismic areas which present a threat along the scale of that faced by earthquake-prone Japan. Those which may be affected by tsunamis are likely even fewer in number. Moreover, the Fukushima plant is 40 years old and was due to be mothballed in February – it was given an extended license, just as has happened in the UK, Germany and many other countries – because no-one could agree on newer, safer designs at the same time as power shortages loomed.

Still, any critical situation affecting a nuclear plant will always loom large in the public mind. The contained partial meltdown at Three Mile Island in 1979 killed no-one, and yet led to an anti-nuclear hysteria from which the industry has yet to recover. The vastly worse disaster at Chernobyl – where a steam explosion destroyed the core of the reactor itself, scattering radioactive elements over wide areas – had more significant and tragic impacts, but even so they are routinely exaggerated. As recently as two weeks ago, the latest UNSCEAR report about Chernobyl concludes that the current death toll is unlikely to be above 50.

Already the knives are out for nuclear power. Germans are massing in their thousands for anti-nuclear demonstrations. My twitter feed is full of tweets by green campaigners concluding that this means the final nail in the nuclear coffin. They could be right. If so, the outcome they hope for would in my view represent a colossal setback for humanity’s efforts to successfully tackle global warming. Without the large-scale carbon-free option of nuclear generation, there is much less chance that industrialised and industrialising societies alike will be able to keep the lights on without significant and increasing use of coal.

This is as much true in Japan, as in China, India, the US and elsewhere. Japan is a very densely populated island with a small, mountainous area and high values placed on natural space. It will never be significantly powered with onshore wind, and solar will also never be able to significantly contribute to the grid in this relatively northern nation. Greater use of geothermal, making a benefit of its location on the Pacific ‘ring of fire’ might help, but it is extremely difficult to envisage a carbon-free future for a non-nuclear Japan. With the country already backing out of its Kyoto commitments, this is the last thing the climate needs.

Perhaps in the fullness of time a rational assessment will conclude that the current crisis is no more an argument against nuclear power than the devastating tsunami is an argument against building towns on the coast. Some level of risk will always need to be tolerated, even as we do everything we can to minimise it. But for the moment we can only hope. First, that a significant meltdown is avoided, and that there is no major release of radiation. And second, that lessons can be learned which can both be retrospectively applied to old nuclear plants and which may even further improve the engineering safety designs of third and fourth-generation nuclear power.

We need nuclear power. If what happens at Fukushima dims the prospects for increasing the world’s use of it, then the battle against climate change will be infinitely more difficult to win. Only time will tell how this crisis will play out. For the moment we can do little more than hope.