In general the standard of reporting about the crisis at Japan’s Fukushima Daiichi nuclear reactors has so far been quite high. Journalists have been careful to emphasise that the radiation dosages so far experienced by the general public have been extremely slight, and far below levels which might cause concern. Relatively few media have tried to associate the ongoing disaster with Chernobyl, with which it has little in common. 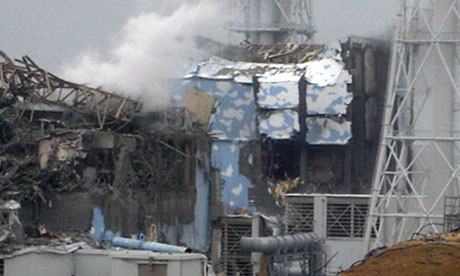 Even anti-nuclear campaigners have by and large been restrained, and have refrained from exaggerating the impact of the ongoing event. There has been a welcome absence of glee, even given the obviously enormous damage being done to the image of the nuclear industry and the potential of nuclear power in general.

That makes the egregious exceptions stand out even more. The worst piece I have seen so far was published today on the Guardian online op-ed section ‘Comment is Free’, penned by the doyenne of the left-wing US radio show Democracy Now, Amy Goodman. I will examine this opinion article in detail below, because I believe it illustrates well much of what is wrong with using Fukushima to support the anti-nuclear argument. Here goes:

[Quote from Wilfred Burchett, writing about Hiroshima:] “It looks as if a monster steamroller had passed over it and squashed it out of existence. I write these facts … as a warning to the world.”

Burchett was the first western reporter to make it to Hiroshima after the atomic bomb was dropped there. He reported on the strange illness that continued to kill people, even a full month after that first, dreadful use of nuclear weapons against humans.

And? Goodman is unsubtly trying to associate nuclear bombs with nuclear power stations in the mind of the reader. Does she understand that it is physically impossible for a nuclear power station to explode like a nuclear weapon? The two things are completely different, and producing the latter is extremely difficult even with plentiful use of the former – just ask Iran.

Perhaps this is just a metaphorical point, to the effect that Japan has been scarred by radioactive fallout once, and is now being again. But one could equally argue that Japan was rightfully determined, after its horrific experience of being on the receiving end of two atomic bombs, to use the technology of nuclear fission to productive, useful ends instead – as it so far has for the past several decades, until faced with one of the strongest earthquakes of the last hundred years.

His words could well describe the scenes of annihilation in northeastern Japan today.

Huh? The ‘scenes of annihilation’ are real and truly awful – but they have nothing to do with Fukushima. They were caused by a powerful tsunami, which levelled whole towns. This is not a difficult distinction to make. To conflate the two is worse than histrionics – it is bordering on offensive.

Explosions in Fukushima reactors No 1 and No 3 released radiation that was measured by a US Navy vessel as far away as 100 miles, prompting the ship to move farther out to sea.

The fact that a US navy vessel moved further out to sea, even if true, does not mean that the radiation levels measured were dangerous. In fact they were barely distinguishable above natural levels and were certainly no cause for alarm. Again, all experts agree on this.

A third explosion happened at reactor No 2, leading many to speculate that the vital containment vessel, holding uranium undergoing fission, may have been breached.

Not quite. Although a containment vessel may indeed have been compromised, it does not hold any uranium undergoing fission. Again, this is a very basic point which it is important to understand. The reactors at Fukushima were shut down immediately and automatically during the earthquake, and all uranium fission reactions ceased. The subsequent cooling problems have come about because of secondary fission products in the core’s fuel rods which are highly radioactive and continue to emit heat. But this is very different to the uranium-235 based chain reaction which goes on in an operating reactor.

Then reactor No 4 caught fire, even though it wasn’t running when the earthquake hit. Each reactor also has spent nuclear fuel stored with it, and that fuel can cause massive fires, releasing more radiation into the air.

The cause of the fire in unit no.4 is currently unknown, according to the IAEA, but either way saying “the reactor caught fire” is almost certainly wrong. Earlier reports of a fire in spent fuel, which is stored in ponds, are probably also incorrect. There have been reports that water levels have dropped in one or more of these ponds, allowing the stored fuel to overheat. This is certainly cause for concern – but the contention that “fuel can cause massive fires” is again misleading. Spent nuclear fuel is primarily ceramic and metal, and is not combustible. In the meantime, we should not make definitive statements about things we do not know, and especially not to score political points.

The 104 licensed commercial nuclear plants [in the United States] are old, close to the end of their originally projected life spans. Plant owners are petitioning the federal government to extend their operating licences.

Yes, but that is because building new ones – which would naturally be much safer than extending the licenses on 1970s-era boiling water reactors – has been so strenuously opposed. The only realistic alternative is more coal, which environmentalists have also been opposing, and for far better reasons. Most importantly, the future of nuclear new-build should not be judged by 40-year-old engineering standards, any more than the newest aircraft designs should be dismissed because of flaws in earlier models nearly half a century ago.

[Goodman is told] “There are 23 reactors in the United States that are identical or close to identical to the first Fukushima reactor.”

That is hardly news. Japan’s Fukushima reactor was bought from General Electric, which used the same design as in many of its US plants. Of course, the intended implication is: ‘This could happen here!!!’ but unless any of them are on highly active tectonic plates and very close to the sea, there may be no cause for immediate panic, to say the least.

Goodman is then told by a Norwegian Green Party representative:

“We know how to get out of the nuclear plants: We need renewable energy, we need windmills, we need geothermal, and we need solar energy.”

…none of which are being employed in Norway, of course, which like Japan is not sunny enough for solar, has very little wind power, and unlike Japan has no recourse to geothermal. Norway mostly uses hydro, which is carbon-free but also not good in earthquakes (not a problem for Norway, of course) or for freshwater ecology in river systems. Incidentally, Norway also produces large amounts of, er, fossil fuels.

Believe me, if windmills and solar were a viable option on their own to replace both nuclear and fossil fuels in Japan, China or any other large industrialised country, I would re-join the Green Party tomorrow. But they aren’t, and demand-side measures will do little to help bend down rising emissions trajectories. This is especially the case in China, where, if it is true that the nuclear new-build programme is being suspended, this is an unmitigated disaster for the climate. Current Chinese plans are for an expansion from 10 gigawatts to 25 gigawatts by 2020, and 100 or more gigawatts thereafter. This is probably a more important issue for the future of global warming than any other single decision made in any other country across the whole world.

If the Chinese do not build nuclear, they will build more coal, as sure as night follows day. Although I would expect the Chinese nuclear programme to be resumed when the Japan crisis dies down, a back-of-the-envelope calculation assuming a non-nuclear China suggests an additional 250 million tonnes of CO2 per year by 2020, and a billion or more ten years thereafter. (Rule of thumb: assume 10 million tonnes of CO2 per year per gigawatt of coal-generating capacity.) Having written a book called ‘Six Degrees’, I don’t see this as any reason to celebrate.

The nuclear age dawned not far from Fukushima, when the United States became the sole nation in human history to drop nuclear bombs on another country, destroying Hiroshima and Nagasaki, and killing hundreds of thousands of civilians.

Ah, back to the convenient but highly misleading conflation between nuclear bombs and nuclear power stations, plus a mention of hundreds of thousands of deaths to add spice to the mix. As things currently stand, terrible though the situation at Fukushima undoubtedly is, I would not expect it to lead to any radiation-related deaths, neither amongst the general public nor the plant workers who are fighting so heroically against against the odds in extremely difficult conditions. Let us hope it remains that way.

Conclusion: we can do without this kind of anti-nuclear polemic, especially when the vastly more urgent issue is to find any tsunami/earthquake survivors, get food and shelter for those who have been made homeless, and try to unite people who have lost their loved ones. Scaremongering about Fukushima can hardly help in this far more important effort. Those who do want to help might consider a donation to the Red Cross (US here, UK here).