Fukushima: rationality vs emotion in policy-making

I can’t help thinking that if the French, German and Swiss governments had got better scientific advice – or listened to the advice of their scientists rather than the opinion pollsters – then they might have come through the Fukushima crisis looking slightly less foolish. Lest we forget, the French government pointlessly evacuated its embassy from Tokyo due to infinitesimal additional radiation, whilst the Germans topped that by switching off several nuclear power stations unnecessarily and importing millions more tonnes of coal (the biggest killer of all energy sources by some margin) from the United States to keep the lights on.

In contrast, the Brits seemed to do pretty well. This was confirmed for me last night at a meeting at the Royal Society in London of the Foundation for Science and Technology, where some of the leading experts in all things nuclear met to debate the outcomes of Fukushima. One of the speakers was Mike Weightman, whose Office for Nuclear Regulation report was issued yesterday, and concluded clearly that there was no case for taking any UK nuclear power stations offline in response to Fukushima (Guardian report, ‘UK nuclear industry gets green light from government inspector’ here).

Angela Merkel take note: this is how proper policy should be done. Instead of panicking about anti-nuclear green votes in upcoming elections, a sensible government leader would ask experts to conduct an urgent safety review of the nuclear power sector in the light of Fukushima and take decisions accordingly. The Weightman report, by the way, is anything but a whitewash – it contains more than twenty recommendations which the industry must respond to within a month. These cover issues like maintaining power supplies in the event of a station blackout, fuel pond design, spent fuel strategies, openness and so on.

A similar report has also been produced in Germany, according to World Nuclear News, but there of course the decision has already been taken. Eight nuclear stations have already been taken offline, and the government has decided to exit nuclear altogether. “I stick to the premise of sensibly leaving nuclear energy as quickly as possible and replacing it with renewables and energy efficiency,” the German environment minister is reported as saying. Good luck with that. I think we all need to recognise that whilst the German government has every right to determine its own national energy policy, the decision to dispense with nuclear is not based on any rational assessment of risk – it is politics, pure and simple. Germany now faces the much greater risk of not being able to reduce its carbon emissions sufficiently to meet its climate change commitments, whilst killing more people via direct pollution from coal-burning plants.

Back to Fukushima. We now know that the crisis was much worse than originally thought, and that possibly a complete meltdown in Reactor 1 took place within less than 24 hours after the tsunami hit. The molten fuel slumped to the bottom of the reactor pressure vessel, and may even have burned its way through in places – which is presumably why attempts to pump in water for cooling ended up creating large volumes of radioactive water which pooled up in the basement and also flowed out to sea. Similar situations probably also took place in Reactors 2 and 3, though this is less clear still. The opinion of the experts at last night’s meeting was that with Fukushima having released about a tenth as much radiation as Chernobyl (which released a huge amount, let it be said), the crisis probably deserves its designation as a 7 on the INES scale.

This Wall Street Journal piece is a must-read, telling the extraordinary story of how workers had to scavenge car batteries to try to keep instruments working, and how the bursting pressure vessel was eventually vented by hand, giving the brave worker who opened it an immediate 100 millisieverts dose. The main piece of luck was that most of the radiation released by the failing reactors went into the sea, where it is quickly dispersed so will have no discernible impact on marine life (and may even be positive in strict ecological terms if it stops Japan fishing nearby for a while).

Things could have been even worse of course. What might have happened then was shared by the UK government’s Chief Scientist John Beddington, whose team conducted modelling during the height of the crisis to figure out worst-case scenarios – say, for example, a triple-reactor set of explosions, with large quantities of ejected dust and radioactive material, plus the wind blowing straight towards Tokyo. What most struck me was that even if that had happened, doses to Tokyo residents would still have been, in Beddington’s words, “trivial”. See the screen grab below from Beddington’s slide presentation: 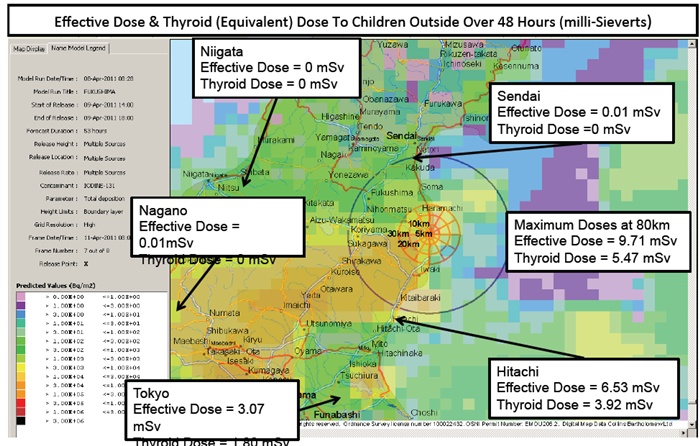 The dose of 3 mSv would be about equivalent to doubling background levels for a year in Tokyo, so hardly worth moving embassies for even if several Fukushima reactors had blown up completely. Beddington had a chart to indicate the relative severity of these kinds of radiation doses too (please excuse tiny writing; note also that the doses listed in the blue box on the left are incorrectly labelled as microsieverts – they should be millisieverts): 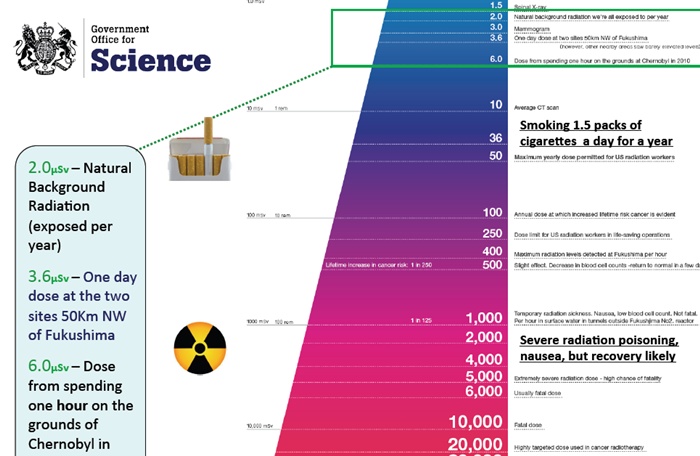 So what do we conclude? There are certainly lessons from Fukushima, but not ones that require the total abandonment of nuclear power. If anything, Fukushima demonstrates that even the much-feared ‘China syndrome’ of a total meltdown does not necessarily mean a disastrous release of radiation – the melted fuel slumps down into the reactor pressure vessel, or even onto the concrete below, but that’s about it. Many books have been written about why we humans are so bad at estimating relative risk, and why nuclear seems to push many of our ‘dread’ buttons even though it is among the safest energy technologies of all. It is particularly extraordinary, given all the interest and hyperbolic media coverage of Fukushima, that it has been – and will likely remain – a non-fatal accident.