Back during the fun and games of the Copenhagen climate conference, President Nasheed of the Maldives made a rousing speech to activists at 350.org, assuring them that: “I am here to tell you that down the road in the Bella Center the Maldives team is fighting to keep 350 in the negotiating text.”

Well, I am here to tell you that we failed. There was no mention of 350, or any other atmospheric CO2 concentration target, in the resulting Copenhagen Accord, and it stayed off the agenda at Cancun too. Like a drowning person, the more time that it spends out of sight the greater the danger that the target will never resurface at all. At the very least, surely, we should not let it die without making a splash. 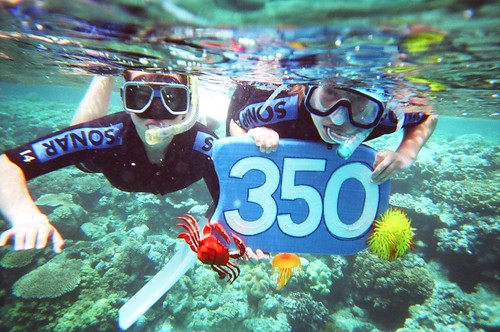 What was that number again?

At Bangkok, from where I am writing this, countries are battling it out over the agenda they will negotiate over for the next few months until December’s next big ‘Conference of the Parties’ in Durban, South Africa. The key negotiating forum is the LCA, an ad-hoc group set up a few years back in Bali to map out a Longer-term framework for Co-operative Action (hence the initials). For three years thereafter 350ppm was in the vital negotiating text, albeit in square brackets (along with 450ppm and various other options) – but at Copenhagen it dropped off the agenda and has never returned.

When it comes to the long-term global goal, all the fighting has gone into keeping the option of 1.5C alive – rather than the two degrees target for limiting temperature rise that most of the big countries support. But 350 is actually a better target, and far more scientifically credible – that is why the international team led by Johan Rockstrom took 350ppm as its key climate change ‘planetary boundary‘. A certain temperature rise is not something we can achieve with any semblance of certainty, because the link between different emissions pathways and different temperatures is not known precisely thanks to varying estimates of the Earth’s ‘climate sensitivity’. A concentration target is something we can actually achieve by limiting emissions.

This is all very strange given that 350 remains the formal position of more than 100 countries, including small island states, African and least-developed nations. This is not surprising, because an unsafe climate – above 350 – will drown the islands and devastate the most vulnerable poorest countries first. But when I have raised the issue here in Bangkok, most delegates have rewarded me with blank looks. 350, they say? Wasn’t that something we forgot about more than a year ago?

Countries here in Bangkok are devoting great effort to keeping their key issues on the LCA agenda – so much so that many seasoned climate negotiators predict that the agenda for the meeting is all we will talk about all week. Some issues are small enough to fall through the gaps. But the issue of a global concentration target is so big that it sits above everything else – and therefore gets forgotten as well.

Unfortunately there is no groundswell for 350. The issue is dying. And once it drops out of the negotiating texts for any serious length of time, it will not get back in for years. There is a mechanism for a ‘review’ of the adequacy of the global goal in 2013 to 2015, but that seems an awful long way away to me.

I still think the issue of a global concentration target has legal legs, as it were. The Bali Action Plan (pdf) warned that:

It also recognised that:

The word ‘urgency’ in the above preambular paragraph was footnoted to pages in the IPCC report which, if you look them up, specifically link temperature outcomes and emissions pathways to atmospheric CO2 concentration targets. So there is a strong precedent in the Bali Action Plan – which is still used as the basis for framing today’s negotiating agendas – for bringing 350 back into the game.

This won’t happen, however, unless pressure on negotiators comes from outside. The small islands and least developed countries need action from civil society, outside the conference centre walls, to give them the confidence to protect their – and the Earth’s – longer-term interests. 350 is missing in action, presumed dead. Please help us to find it and to breathe new life into what is surely the most important global target of all, before it is too late.