Is Bolivia trying to destroy the international climate change regime?

The answer of course is no. Bolivia is actually trying to destroy capitalism. Its constant battle to block the normal schedule of progress in the climate negotiations can surely only be understood as being another theatre in this broader ideological crusade. Or is something a little more sinister going on?

Bolivia’s lead negotiator Pablo Solón (reputedly an unrepentant Trotskyite) distinguished himself at the final showdown in Cancun by insisting on spoiling the party, holding the floor at the final decision-making plenary for what seemed like hours when every other country on the planet – including even Marxist-minded allies like Venezuela and Cuba – just wanted to formalise and celebrate the small amount of progress they had made and then get on the first plane home. 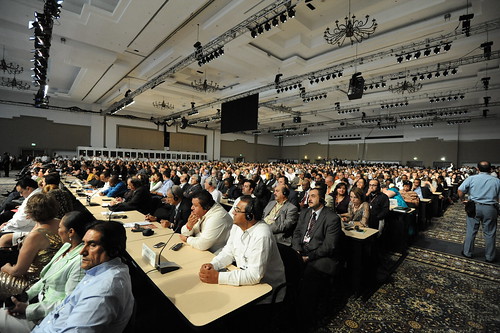 No-one comes here for a holiday

Cancun was important because it put the UN climate change process back on the rails after the difficulties of Copenhagen, integrating most of the controversial ‘Copenhagen Accord’ into a proper ‘COP’ (Convention of the Parties) decision, and restarting the long slog towards a legally-binding global treaty. After the bitter quarrels of Copenhagen, it was heartening to see everyone united in giving the Mexican foreign minister Patricia Espinoza a hearty standing ovation to recognise her skilled handling of the conference.

Everyone, that is, except Bolivia. Now Solón has submitted a statement [PDF] to the UN climate change secretariat demanding that the decision at Cancun be rescinded on the grounds that Bolivia’s objections were ignored by Espinoza when she brought down the chairman’s gavel to conclude the meeting. Under usual UN procedures consensus is necessary to make a decision, and Solón maintains that since Bolivia clearly stated its objection at the time, no consensus was obtained.

Bolivia views this violation of consensus as a disastrous precedent for the multilateral system and the rule of law and will seek to defend the rights of Bolivia and ensure that rules and procedures apply equally and fairly to all States, large and small.

Legally this is difficult territory. Several other parties at the time, objecting to Bolivia’s blocking stance, insisted that consensus does not mean that a single country can exercise a veto in the face of the entire world. This seems reasonable, otherwise nothing would ever get done. But unfortunately formal rules have never been agreed – the consensus rule operates as custom, but what ‘consensus’ means has never been defined or its operation adopted formally by the parties.

In cases of this kind, countries look to precedent. As it happens, there are precedents in the climate negotiations for individual blocking countries to be ignored: the Kyoto Protocol only came into existence because the objections of the Saudi negotiator were summarily dismissed at COP-1 back in 1997. But blockers cannot always be ignored: only six countries objected to the draft Copenhagen Accord, but they carried sufficient weight to ensure that no consensus was reached, and the Accord was merely ‘taken note of’ rather than adopted as a formal decision.

Many NGOs and activists have sympathy with the Bolivian position. The Bolivians demand extreme action to combat climate change, with a target of 300ppm of CO2 in the atmosphere and a complete cessation of global emissions by 2040. The problem is, apart from the fact that this is dreamland stuff, is that they do not make their demands constructively: their position is more about victim-posturing and blaming capitalism/the rich countries for every receding glacier rather than anything resembling a serious attempt to make progress.

As one sympathetic but frustrated youth delegate blogged after Cancun:

Yep, [they] blocked everything. Understandably, they spoke out against REDD+ [using markets to reduce deforestation], they scoffed at meager commitments, they called for more ambitious action. However, Bolivia also blocked due to typos and missing page numbers; they blocked adaptation funding, technology transfer, a second commitment period of Kyoto. Claiming they were acting with allies, such as the African nations and the small islands states, Bolivia offended countries who were counting on progress in these negotiations.

Now they are blocking again, and it is a fair bet that next week’s ‘intersessional’ climate negotiations in Bangkok will be forced to devote substantial time to procedural issues in the face of this one-state protest movement. This is unfortunate because everyone knows that momentum has to be maintained after the qualified success of Cancun if the next COP in Durban at the end of this year is to sufficiently pave the way for a full legally-binding treaty outcome in 2012 (presumably at Rio+20).

One thing is not entirely clear. Are the Bolivians acting alone out of misplaced ideological passion (as I suggested above) or are they, at least to some extent, acting as ‘useful idiots’ by adopting an extreme G-77 (developing countries) position and hence giving cover to the wider interests of India, China et al? The Bolivian insistence that rich countries are the sole cause of climate change meshes well with the unwillingness of the big emerging emitters to be coralled into adopting any legally-binding emissions caps of their own.

Some clarity on this may emerge in Bangkok, but I doubt it. More likely formal progress will be glacially slow, and informal progress on the sidelines little different. I know the ‘progressive’ Cartagena Dialogue countries are planning a busy programme of action to help speed things along, but the meetings will be extremely technical in nature and devoted in large part to process issues. The first order of the day will be to adopt the proposed agenda. But it is a sure bet that one country flag will be raised – Bolivia’s – and that their aim will be simple: to block.