Energy buffs will recall David McKay’s cult-status book Sustainable Energy – Without the Hot Air, which aimed to bring an ‘energy literate’ attitude to the debate about how we might successfully decarbonise the UK economy. Given how difficult it is going to be to achieve any meaningful CO2-reduction targets without nuclear power, many suspected McKay of secretly advocating nuclear – as Fiona Harvey hints today.

But McKay refused to be drawn, simply insisting that an energy debate could not be meaningful without numbers. To his great credit, he has brought this approach to his job as Chief Scientist at the Department of Energy and Climate Change (DECC), which has launched a pathway modelling exercise aiming to bring both experts and the wider public into the debate. 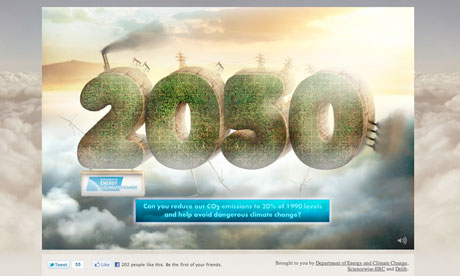 Create your energy future - without the hot air

DECC has just launched an extremely clever and visually compelling interface to allow everyone to create their own 2050 carbon-reduction pathway. I urge readers to try it out – just ignore the annoying music. As one of eight selected ‘experts’, including Friends of the Earth, National Grid and others, I was invited to help kick the thing off with my own pathway choices, which you can see (and make comparisons with the others) on the DECC blog.

All the background assumptions and calculations in the model are open-source, and those with an eye for the smaller details will want to review this fearsomely complicated spreadsheet. Good luck!