Why does the Guardian keep getting it wrong on climate and developing countries?

The Guardian’s take on climate change action in developing countries is getting increasingly divorced from reality. Witness today’s report purportedly exposing a sinister plot by the European Union to dish out climate adaptation cash in return for favours in the international negotiations. 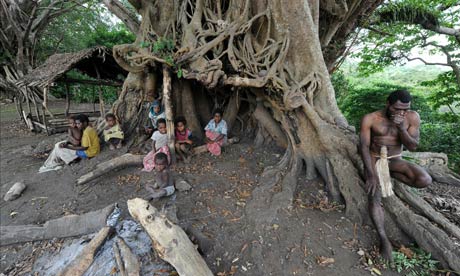 Some climate victims in a developing country

Pacific island states on the frontline of climate change are to receive €90m (£76m) in EU cash for climate-related projects in return for siding with the European bloc at international climate negotiations.

…runs the first para. Notice the conspiratorial overtones in the lines that follow:

The cash may appear small in EU terms, but represents as much as 19.5% of the nominal GDP of Vanuatu, and more than 12 times the GDP of the Pacific Islands Forum’s poorest member, Niue.

What is wrong with this? Well, it’s almost certainly untrue, for a start. The Guardian’s correspondent Leigh Phillips (not John Vidal, for once) offers no evidence at all to support his contention that small island states have been bought off other than that the document outlining the funding will “require” (the Guardian’s words) “joint positions on the international stage”. So small islands and the EU have decided to work together. How awful! Don’t they know that rich countries are always the bad guys and must be constantly denounced?

The second rather bizarre contention is that developing countries receiving cash for adaptation must necessarily be evidence of nefarious political shenanigans, even when every development/environment group under the sun has been demanding increased funding to cover climate impacts and disaster preparedness for years now. Indeed, every NGO pronouncement on the subject predictably bemoans how little cash from rich-country blocs like the EU has been forthcoming to support the impacts of their CO2 emissions. Yet when the EU coughs up, this is spun as a corrupt sell-out by the poor, cash-strapped and politically-pressured small islands.

There is a pattern to this reporting, unfortunately. And it is one which reflects an outdated leftish ideological mentality about climate change mitigation and the role of developing countries – particularly the most vulnerable ones – within it. Back in December, when we were all at the negotiations in Cancun, the Guardian spun a cable from WikiLeaks as evidence that the Maldives had been bought off – at a price tag of $50 million – to support the US position on the Copenhagen Accord.

As advisor to the President of the Maldives, I have fairly privileged insider knowledge of the situation regarding both donors and the positions we take at the climate negotiations. So I can speak with some confidence in saying that the accusations were completely untrue. Not only has nary a penny been received by the Maldives from the EU or the US to date, but also there has never been any question of tying climate aid to political positioning at the international negotitions. “To suggest, therefore, that the US somehow paid-off the Maldives to support the [Copenhagen] Accord defies all logic,” complained the foreign minister, who immediately released all the relevant documentation to prove definitively that the accusation was untrue.

Underlying this, of course, is the wholesomely patronising assumption that developing countries – particularly small island ones – cannot think for themselves, and that any stance they take at the UNFCCC meetings other than an outright rejectionist one (the sort of posturing and victim-playing taken to an absurd extreme by the Bolivians at Cancun) must be evidence of undue pressure from the rich world.

In fact, the Maldives and many other developing and small island countries have decided for themselves – quite independently – that they can move from being victims to victors by taking the lead in becoming the world’s first carbon-neutral economies. I would have thought that the idea of the world’s most vulnerable nations taking charge of their own destinies would have had climate campaigners dancing in the aisles, but apparently not.

The ideology of many leftish greens has for so long focused on blaming the rich for climate change that any idea that the poor could act for themselves is fearsomely resisted as some kind of sell-out. Poorer nations are thereby victimised by those that purport to represent their interests, all in the service of post-colonial guilt.

Just as importantly, the narrative of poor-countries-as-victims seeks to corral all developing nations into a position which precludes any kind of meaningful alliance emerging between rich and poor countries to work on solving climate change together. This was the kind of bitter and divided atmosphere that led to the near-catastrophe at Copenhagen, an outcome which – had the process not been put back on the rails at Cancun – could have led to the collapse of 15 years of painstaking work to construct the climate regime.

It is no coincidence that the leak which destroyed any chance of a better outcome at Copenhagen came via the Guardian’s John Vidal. Once again, as an insider at the negotiations – at the heads of state meeting that drew up the ill-fated Copenhagen Accord – I emerged with a rather different perspective (also published, I should say, in the Guardian – no good newspaper is an ideological monolith). There is no point in re-opening old wounds now, particularly after things have been fairly successfully patched up at Cancun, but let’s just say that everything was not as it seemed in John Vidal’s original reporting.

The upshot is that most of the media – and campaigners too – have missed what is turning out to be the best climate-related news story in a decade, and the one which makes me more optimistic than for many years about the future of the UNFCCC negotiations. This is that there has been an epochal shift in the climate change narrative, from one where countries all insist that others must act first, to one where increasing numbers of nations are deciding to patch up their differences and act together – and stand to reap big economic benefits in conventional terms for doing so.

This is the Cartagena Dialogue – an under-the-radar informal alliance of more than 30 countries, rich and poor, which was co-founded by the Maldives early last year at a meeting in the Colombian city of Cartagena. Latin American voices are particularly strong in the Cartagena group, led by Colombia, Chile and the carbon neutral-aspirant Costa Rica. Just next week I will be attending a Cartagena Dialogue meeting in Malawi, where we will be discussing how we can make low-carbon development a reality and work together to break the impasse in the Kyoto negotiations.

This, ultimately, is how we can solve climate change – not by blaming each other for causing the problem and insisting that everyone else (rich or poor) should act before we do, but by working together as an international alliance dedicated by speeding up the transition to a low-carbon global economy. I can only hope that the Guardian stops trying to undermine this effort and starts supporting it instead – before some real damage is done.