A week into the crisis at the Fukushima Daiichi nuclear plant, the situation seems to have stabilised – though with reliable power not yet restored to several of the damaged reactors, and fuel assemblies in units 1, 2 and 3 still not fully immersed in water, there is a long way to go before proper ‘cold shutdown’ is achieved. Even so, my earlier prediction that there would be no significant risk to any members of the public – and no radiation-related deaths or injuries amongst the workforce – seem to have been borne out by events. 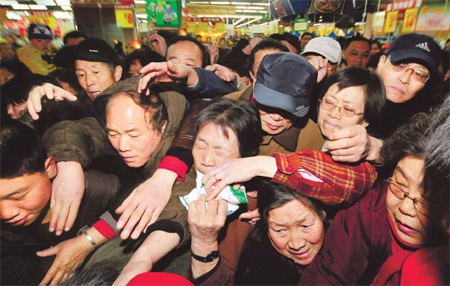 My new prediction is that those who lost their nerve and panicked will end up when final judgement is made being seen to have made the most negative contribution to the sequence of events in Japan. Top of my list is the Swiss, who have apparently decided to move their embassy from Tokyo to Osaka because of fears of radioactive fallout. I do hope their staff have a safe journey: they will be exposed to vastly greater dangers from an accident on the road journey down to Osaka than if they had stayed put in Tokyo with its infinitesimally raised levels of radiation.

There have been breathless press reports about radioactive iodine being identified in milk and spinach produced in Fukushima prefecture, whilst a shipment of fava beans to Taiwan has also been discovered to be ‘contaminated’. I would personally quite happily consume any of the above: the risk is so small as not to be worth taking seriously. It is a measure of our shared preoccupation with all things radiological (except medical procedures, where people subject themselves to much higher doses of radiation without a second thought) that such tiny risks make headline news.

The political fallout from Fukushima will be far more dangerous than anything physically radiaoactive. In Taiwan, in shock because of its entirely safe consignment of fava beans, thousands have protested against nuclear power, whilst the government has decided to delay the start-up of a new reactor. In the UK, even the level-headed Chris Huhne has mulled over backing away from nuclear, whilst Switzerland has suspended plans for three new reactors. Reflecting the political clout of the Greens there, the most extreme action has been taken in Germany: the country has shut down seven of its oldest plants, and suspended plans to extend licenses on more.

Apart from Europe, the other big players in this debate are the US and China. For the former, it is unclear which direction the administration will tip. It has enough well-informed scientists to know perfectly well that the Fukushima accident says nothing much about the future of nuclear power in America, but public opinion must be bowed to – and West Coasters have been rushing out to buy iodine pills and seaweed in order to feel that they are doing something as the ‘radioactive plume‘ drifts their way (though I would rather breathe that than LA smog anyday).

For China, the regime has seemed to be very sensitive to public fears of nuclear danger – and the fears so far have been extreme, and entirely out of proportion to any danger. The authorities were unnerved by outbreak of panic-buying, as Chinese citizens stockpiled salt in the erroneous belief that it would protect them from any radioactivity spreading from Japan. Needless to say, this is not a public climate likely to be friendly to additional nuclear power in China. Its government has suspended work on 26 reactors under construction, and is reconsidering plans for more than 60 more.

There was some early talk about how the renewables industries would benefit from a shift away from nuclear, but the real benefits will fall – as I also predicted – towards coal and other fossil fuels. Having shut down its nukes, Germany is already importing much more coal from the US and other countries, as is Japan. “The market looks pretty good for Europe for the longer term,” one coal exporter told the Wall Street Journal. I’ll say. The market for coal in China looks pretty good too.

This is a good time, then, to try to make a first-guess numbers-based assessment of what running down nuclear and switching back to coal and gas will mean for carbon emissions going forward. Let us assume, therefore:

This gives us, by 2030, another two to three billion tonnes of CO2 per year. Given that the 2020 ‘gigatonne gap’ (PDF tech. summ.) identified by UNEP amounts to as little as 5 gigatonnes per year (this is the gap between projected emissions and what is necessary to stay below two degrees) the amount is substantial, enough perhaps to tip the balance between a 2-degree and a 3-degree scenario. As my book Six Degrees explained, above two degrees lie some very dangerous ‘tipping points’ which could take the biosphere in the direction of uncontrolled global warming.

It would be overstatement at this point to say that the world’s reaction to the Fukushima nuclear crisis could make the difference between controlled and uncontrolled global warming. There are too many needed assumptions to make this kind of prediction with any confidence, and electricity generation is only a part of the world’s dependence on carbon-based energy (don’t forget deforestation, transport, agriculture etc). But I think this exercise at the very least helps us face up to the reality of risk: and the risk facing the biosphere from climate change is many orders of magnitude greater than anything resulting from even a succession of worst-case-scenario nuclear accidents. Many greens point out that wind farms and solar panels are even less risky than nukes: this is debateable, but even if one is to accept it at face value, there is another risk at play here – that the anti-nuclear, pro-renewables strategy holds a higher risk of not sufficiently mitigating global warming.

Even a week after Fukushima, I still think a pro-nuclear, pro-renewables, pro-efficiency strategy is the least risky of all, at least as far as the future of the planet is concerned.